The Dane County Hazardous Devices Unit was initially established in 1970 and is the oldest and busiest unit in the State of Wisconsin. In its proud 39-year history of dedicated service to the citizens of Wisconsin, the HDU is the most active specialized unit within the Sheriff's Office and is certified and accredited nationally. The unit is comprised of sworn officers from within the agency who are trained and certified by the Federal Bureau of Investigation (FBI) and the U.S. Army as Hazardous Device Technicians. The unit also has one sworn deputy sheriff attached to the unit who serves as the explosives detection K-9 handler.

The Dane County HDU provides professional expertise to twenty-six counties in the western half of Wisconsin and has handled over 2,700 calls for assistance since 1970. In 2008, the unit responded to 92 calls for service alone. Of these calls, 75% originated in Dane County, while 25% occurred outside of the county. The HDU responds to calls for explosive devices that require safe procedures to be performed. These types of devices include improvised explosive devices (IED), such as:

Unit members are also trained to deal with weapons of mass destruction, assist with post-blast investigations, support tactical units, and provide dignitary protection. The unit is further trained to provide educational instruction to government entities and to private-sector groups on explosive-related topics. The HDU also provides support to government agencies by assisting in the prosecution of persons changed with explosive crimes.

August 1970: Madison, Wisconsin. The Dane County Sheriff's Bomb Squad investigates the bombing of the Army Math Research Center in Sterling Hall on the University of Wisconsin campus. The incident involves the first large vehicle-borne improvised explosive device (VBIED) ever used in the United States. The bomb consists of 1,800 pounds of ammonium nitrate explosives (ANFO) and is heard 28-miles away from citizens in rural Dane County. The incident results in the death of physics researcher Robert Fassnacht and causes over 6 million dollars of property damage to the area.

March 1983: Wisconsin Dells, Wisconsin. Five identical time bombs were discovered at the Riverview Amusement Park. These explosive incendiary devices were all timed devices. While the devices failed to detonate, some of the timers were within minutes of detonation. An Illinois couple was charged and convicted in federal court for the offense.

October 1987: Madison, Wisconsin. The bomb squad conducted a post-blast investigation at the scene of a bank burglary and explosion in the City of Madison. The suspects attacked a safe inside of the bank by the use of explosives. The detonation caused an estimated $50,000 in damage to the building and its contents.

April 1988: Madison, Wisconsin. The first fatal bombing since the 1970 bombing of Sterling Hall was recorded when a 25-year old Madison man went on a shooting rampage, with the intent of killing his ex-girlfriend. The suspect was armed with a rifle, knife, and five pipe bombs in a residential neighborhood. The suspect died when one of his devices detonated in his own hand. The incident resulted in four people being wounded by the suspect's actions.

June 1992: Madison, Wisconsin. A heavily-armed subject exited his apartment and began discharging a firearm, which resulted in a child being injured. The subject killed himself after being shot by the first responding officer on the scene. Moments later, a fire was discovered in the suspect's apartment, which forced the evacuation of the building. Firefighters attempting to extinguish the fire soon discovered a booby-trapped shotgun, which forced them to withdraw and fight the fire from outside. The bomb squad removed four separate homemade explosive devices from the apartment, along with numerous firearms that were loaded and cocked. One of these firearms was later tested and found to be booby-trapped. When initiated the entire barrel exploded and fragmented with a high-order detonation that propelled shrapnel 75 yards away.

June 2004: Prairie du Chien, Wisconsin. Members of the bomb squad assisted the State of Wisconsin in removing 830 pounds of highly deteriorated nitroglycerin dynamite from a retired contractor's storage shed near the municipal airport. The operation required removal of the product and transportation to a disposal site to complete render safe procedures. The operation was completed over a two-day period after which time the citizens of Prairie du Chien in the affected area were allowed to return to their residences.

Fall 2005: Madison, Wisconsin. A series of explosive devices were located in a Dane County parking ramp over the course of several months. One of the devices detonated prior to the unit's arrival, which resulted in damage to a vehicle. All other devices that were located during these incidents were rendered safe by the bomb squad.

April 2008: Viola, Wisconsin. The team was requested by the Richland County Sheriff's Office to assist with an armed and barricaded subject in his rural home. The subject had fired a rifle at Richland County deputies who were attempting to serve civil process at his residence. The Richland County Sheriff's Office had obtained information leading them to believe that explosive devices may be present on the property. After the subject was taken into custody, the bomb squad spent almost two days clearing the entire property for explosives, explosive devices, and booby traps. They were assisted in this work by a U.S. Army Explosive Ordnance Disposal (EOD) Unit from Kansas City, Kansas. 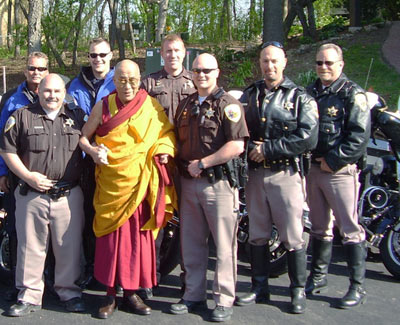 The Dane County Hazardous Devices Unit works with the United States Secret Service and the United States Department of State with the protection of visiting dignitaries. Those designated individuals receiving protection include current and former U.S. Presidents, Vice-Presidents, Senators, heads of foreign governments, and other individuals designated by the federal government. Since 1970, the Bomb Squad has assisted in protection details for sitting presidents, presidential candidates, heads of foreign governments, and world religious leaders that have visited the squad's area of responsibility. Some recent examples include former Presidents Bill Clinton, George W. Bush, Barack Obama, and His Holiness the Dalai Lama. The unit also provided protection during the 2002 National Conference of Mayors event which was held in Madison and has provided support at various sporting and political events that have been held in the area.